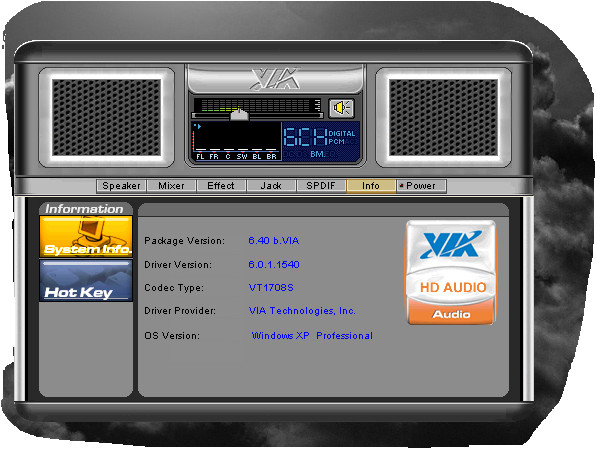 Open device manager; Go under Sound, Video, and Game Controllers; Open VIA HD Audio, click uninstall; Click action, scan for new hardware changes; Wait for VIA HD audio to. If you download the current driver from VIA Auido HD Deck, you go in the zip-folders ->VIAHDAud ->Present ->VDECK64. To obtain BIOS, drivers, BSPs or EVKs for VIA Embedded boards and systems please visit the respective product page you are inquiring about and click on the downloads tab. For older products please search in our EOL section of the site. VIA Chipset Driver Support. For all VIA chipset, audio, video, networking, and.

• • Helpful resources • • • • • General rules • Follow • Keep it civil and on topic. Comments or posts that are disrespectful or encourage harassment of others (including witch-hunts of any kind) are not allowed. • Do not post pirated content or promote it in any way. • Blogspam, mobile links and URL shorteners (such as tinyurl or bit.ly) are not allowed. • Do not post any offensive material • Do not post personal information (address, email, phone number, etc.) • Please remain respectful to users at all times. • Do not 'backseat moderate' - Report any rule breakers to • No spamming, advertising. • No referral/affiliate-links.

• - Android Operating system and its peripherals discussions. • - Apple devices, services discussions. Hello everyone, I just upgraded from Windows 7 to Windows 10, and I'm having an issue with what I believe is my Audio Drivers (Via HD Audio, currently version 6.0.11.800). I'm having an annoying problem with my laptop not automatically switching the sound output between my headphones/speakers I plug into the headphone jack, and back to the native speakers on the laptop once I unplug them. I have to manually switch the default device in the audio settings between the headphones/plug-in speakers, and the built-in speakers on the laptop, everytime I unplug them.

In addition, when I try to open up my audio management program, Via HD Audio Deck, it just doesn't open at all, when it opened fine in Windows 7. I've tried running it in compatibility mode, and it still doesn't open. Windows 10 is great, but this is the one thing that is making me consider going back to 7, where none of these issues were present. Is anyone else having this problem? Could anyone give me a hand please? Sorry about the delayed response, I just got off with Microsoft support and they installed a new driver on my machine which has the same version, but the name of the driver has changed to 'Via HD Audio (Compatible)'. Still no difference after they rebooted my machine.

I may try your idea with the Windows 8 driver, but I don't want to try to install it while another driver is there, I get the feeling that's asking for a BSOD due to the conflicting drivers.:P Also, I was digging around and found, it looks like I'm not alone here. Edit: I sent an e-mail to VIA's tech support and got a message back saying that their english rep is out of the office until the 17th. I'll keep this thread updated as I learn more. Thanks again for your help! Before I give this a try though, I'm gonna give VIA until next Wednesday to get back to me about this issue. (I sent them an e-mail and have heard they are pretty good at getting back, but their english rep.

Is out until next Monday). Corso Di Francese Online Pdf. If I don't hear anything from them by then, I'll be giving this a try. Also, if VIA does get back to me and shares a more up-to-date driver with me, I'll share it on here with everyone, in addition to whatever other info they give me about this issue. In any case, I'll keep everyone posted about this:) • • • • •. Okay, after a LONG time of digging around and waiting. I’ve done it.

I didn't do the method you mentioned, and still have not heard back from VIA, but I’ve found a solution that has (as far as I’ve seen) solved it!! And best of all: you don’t have to disable windows updates permanently in order to make it work. I’ll explain everything I did in as much detail as I can remember. As I mentioned earlier; I run an Asus G75VW. After digging around I found topic. Within this topic, someone linked driver package.

Here are the steps that I did that fixed everything: • Before you do anything, create a system restore point by going to control panel, recovery, Configure System Restore. So if anything goes wrong, revert back to that restore point.

• Download and install this package, and before you reboot your machine, make sure windows updates are turned off/disabled. • Reboot • Turn back on Windows Updates • After you reboot your machine, go into your device managers, and Scan for Hardware changes if you don’t see Via Audio Drivers already there. If you do not see it there, try plugging in and unplugging a pair of headphones or speakers. If you do, right click and click update driver software, and you should have a new driver called “Via HD Audio (Win 10)” (Microsoft has released an updated driver recently). • Once this is done, go into the now newly installed “HD VDeck” • You make sure to set the speakers as default when no headphones are plugged in, and when headphones are plugged in, set the headphones to default. • THIS LAST STEP IS IMPORTANT.

You may notice that while you are plugging and unplugging your speakers/headphones in, it switches between the two, but it still plays out the speakers on the Laptop. The reason for this is because the headphones are acting as independent rather than redirecting the sound.

To fix this click, and then change the settings look like. Everything should work beautifully now, it did for me at least! Although I don’t have my 2.1 surround sound enabled and my bass is turned to 0, it now switches beautifully between the laptop speakers and the headphones/external speakers whenever they are plugged in.:D I hope this solves the problem for others! That's interesting! I noticed that MS had an update and for some reason it seems to have fixed the lack of sound and bass in my PC, however, I've also went into a different method.

I recently purchased a DAC/AMP since I've been working with Audio for a while and needed something to help me out with clear sound. It's a work around and has saved me a bit of a headache. But, I've saved your comment for usage in the future once I get my backup PC working.it too uses VIA drivers. So, your work around might work me as well.

I had the same problem, was tempted to try the linked driver download but chrome warned me the site was dishing up dodgy stuff so decided not to. However I manged to get it working by launching Vdeck in compatibility mode for windows 8. When I first ran it I thought it wasn't working because nothing happened. Turns out VDeck was going straight into the tray.

Worked great for a few weeks but as of this week I now have a new problem. My mic isn't detected unless there is a mic device plugged in at time of startup. If I don't have my headset plugged in when I boot, windows says I have no recording devices and no amount of plugging will register one.

If I reboot with my headset plugged in, windows shows my recording devices as normal and I can unplug and reinsert just fine with no problems.