Hello, some years ago I have bought this Villiers Mark 9D (I guess so.) bike. Up to now I do not know what bike it is. I bought it here in Luxembourg and was being told it was some Belgian bike, but more and more I come to believe this must be British.

Air Filter (Vokes Ltd.) and headlamp (Villiers of Northampton) are british parts I would say. The following numbers can be found: Frame No.: '2585.' (yes - with a period at the end) Engine No.: 765/30158 On the inner side next to the flywheeel there is something like 'Pat. 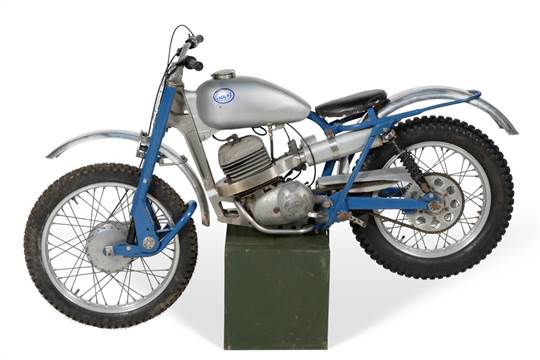 The frame looks very much like Sun during the 40/50's. Thanks in advance and best wishes from Luxembourg. Can't tell you what make Horace. Identifying anonymous 9D powered bikes is an art form in itself but I can narrow down the year of manufacture somewhat. This type of engine started as the 8D in the mid-30's and with improvements became the 9D and stayed in production until 1949. The 9D engine identifier prefix was AAA both prewar and for wartime production but Villiers changed their numbering system post war to a three digit identifier plus serial number.

The three digit identifier shows who the engine was originally made for and the serial number shows how many engines of that general type Villiers made. So, the 765 identifier shows it is a postwar engine (1946-49) and the 30158 shows Villiers had made over 30,000 9D's by this time but what manufacturer was 765? Here we grind to a halt. Villiers records are very patchy for this immediate postwar period when everyone was getting back to civilian life. We don't know who 765 was.

A lot of Villiers enthusiasts are slowly piecing together all these engine identifiers but there are still huge gaps. The nearest I can come is 763 which Villiers used on 10D engines sold to OEC in 1949-50.

This gives a broad hint that 765 was one of the final batches of 9D made so probably in 1949 during the factory changeover period from the 9D to 10D engine. Sorry I can't be of more help but it is a start and narrows the search period for you. I don't think your bike is a British make. Although there are indeed great gaps in the engine supply lists, the major British users of the Villiers engines are comparatively well documented as compared to the many small mainland European manufacturers that used these engines. As to your feeling that it could be a Sun - according to Roy Bacons 'Villiers singles and twins' Sun never used the 9D engine. I know of two Belgian makes that used Villiers engines in the late forties - Socovel and Lion-Rapide - but both had already switched to telescopic forks in 1949.

Another make that springs to mind is the Dutch Gazelle. Maybe you can find some pictures of Gazelle bikes of the late forties on the net. At least I know that they still used girder forks in the early fifties! Hi again Horace, A minor point, one that has no bearing on your hunt but helps your understanding of the Villiers numbering system. Villiers didn't allot a three figure identifier to each manufacturer and leave it at that.

They allotted the number to each individual contract with a manufacturer and when the manufacturer came back for another lot of engines for next years range for example, Villiers gave the new contract a new three figure number so you get different identifiers from year to year. Of course Villiers rapidly ran out of numbers as they got up to 999 by about 1950 or so. They then started again adding an A suffix so you can get a 765A or 765B identifier neither of which bears any relationship to your engine. When that ran out they went to a B suffix and so on. They were up to an F suffix by the time they went bust. Its lots of fun working through the Villiers maze.

Motorcycle engines were only part of Villiers business. They used the same numbering system with engines supplied for industrial, agricultural and horticultural use, so there are great gaps in the motorcycle numbers. So far no one has come up with a master list although people are trying. It'll make life a little easier when they do.

Thank you all for the good answers. I am amazed on how much knowledge you guys have assembled here. I still hope to find more answers via the local registration authorities in Luxembourg. Plus, a colleague here even has local annual - what they call 'Auto-book' - of the time.

In that you can find all registrations for road vehicles in Luxembourg, even with the name and address of the owner. Wish they had similar in other countries. Of course only the natural size of rural Luxembourg and its limited number of registrations made such a register assessable. Hi again Horace, It's fun trying to identify old bikes isn't it.

The Villiers master list remains as before. There isn't one and it's only sad obsessives like myself who explore the mysterious workings of the Villiers factory. The major list of what is known can be found in a Roy Bacon book 'Villiers Singles & Twins' but it doesn't touch exports. People like myself are slowly adding to Roys list but as before the identifier prefix 765 remains a mystery. There is no complete master list on the net. As with all motorcycles (all vehicles for that matter) the major identifier is the frame or chassis number.

That is what most authorities rely on. Engines are far too easily exchanged for them to provide reliable vehicle identification. I would be waving the frame number around far more than the engine number. As the Socovel is of Belgian make and you live in Luxembourg you should be able to track down the old factory and who now has whatever records remain. Some local library, town hall or historical society near to the old factory will have what you want. It's just the standard research techniques you learnt in uni, that's all. You'll soon know whether or not you have a Socovel.

Best of luck. Hi, thanks for your answer. Concerning the list I thought I had found a version on the net, which I could not trace back. But your right, maybe I should try to find the old records in Brussels. However I am pretty sure now this must be Socovel, if u look at this bike:, the chassis is identical except for the toolbox and engine. Even the headlight is matching.

BTW, the engine number seems to be 716, is this recorded in Bacon's list? I do not have it on hand here right now. At least I know now where to start I guess. Its the engine prefix before the / that is the identifier. For example the full engine number would be something like 716/*****, the 716 being the identifier and the * asterisks actually being the individual number of the particular engine.

Unfortunately 716 is listed as being for the later type 1F Villiers as shown in that Socovel picture you gave us and not for a 9D. There is a lot of the fun in tracking down the identity of a mystery bike. It's very satisfying when you get there. My 1930 Radco took me years to identify. It is so agricultural I thought it was a homemade bitsa so didn't try too hard but chasing down another vintage bike I was amazed to find a picture of the frame in a 1929 copy of 'Motor Cycling' explaining how it was the all-new frame for the 1930 range. You just have to keep plugging away and you'll get there. Well I never indicated that the bike shown in the link was mine.

It was just reassuring me that mine must definitely me Socovel, too much details matching now. Having had a look at my book 'Belgian Motorcycles', I found that Socovel introduced two Models in 1948: a) 'Model 1': 98 ccm Villiers - I would say that is the one in the link above having definitely a 1F installed b) 'Model 2': 122 ccm - which must be mine with a 9D installed As they changed to telescopic forks in 1949 only, this is another match as mine is with girder forks.

However, I want clarification via photo / another example. I will continue searching on the jumbles around here. But why don't you publish your list of engine numbers? It could help others a lot. I do not find back the list I had seen in 2011 when starting this thread.

As Bacon's list from my book is Brit bikes only, a list of continental manufacturers would be helpful as there must be lots of them still out there. Hi Horace, Isn't it a good feeling to finally solve the mystery? I shall now add 765 - Socovel to my list of Villiers numbers not in Bacon and we are one more towards the Villiers Master List. As an aside, a mate of mine has a 9D powered Acme. This is the Australian equivalent of your Socovel. Torrent Windows Server 2008 R2 Active Directory Training Course on this page. Made out here and a mystery bike to any one outside Australia.

He recently completed his first rally on it and remarked how different it was from his daily rider Triumph. ' I went on some roads I often travel and was surprised at what I saw at Acme speeds plus with traffic lights etc, it wasn't that much slower than usual.' I think he'd notice the speed differential a lot more on an open road country rally. Anyway, he says it's lot of fun rallying a tiddler and quite different.